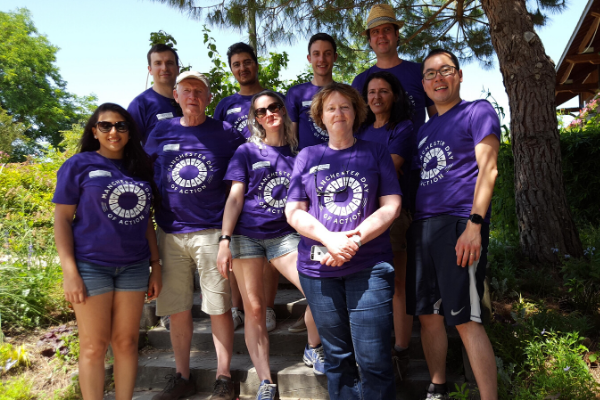 On 29th of July 2019, the Paris chapter of the Manchester University alumni network organised a cleanup day on the banks of the River Seine (starting in Chatou and finishing in Rueil-Malmaison.

Manchester Day of Action is a worldwide initiative, organised annually by the University of Manchester, as part of its commitment to the United Nations Sustainable Development Goals.

The event was based on the concept of ‘plogging’; which is a Swedish initiative that combines jogging (or walking) with picking-up litter as you go along.

A group of around ten alumni, equipped with a bin liner and wearing a purple Manchester Day of Action t-shirt, took part in this day of action to support the local community and preserve the environment.

Despite the 39 degree heat, everyone was really enthusiastic to pick up the litter as they went along. The group walked a 7 kilometre loop in total and we ended the event with a well-deserved lunch at a local restaurant in Chatou.

The event was a real success as we managed to pick up around 500 grammes of rubbish per person, ranging from crisp packets, to cigarette buts, plastic bottles and cans.