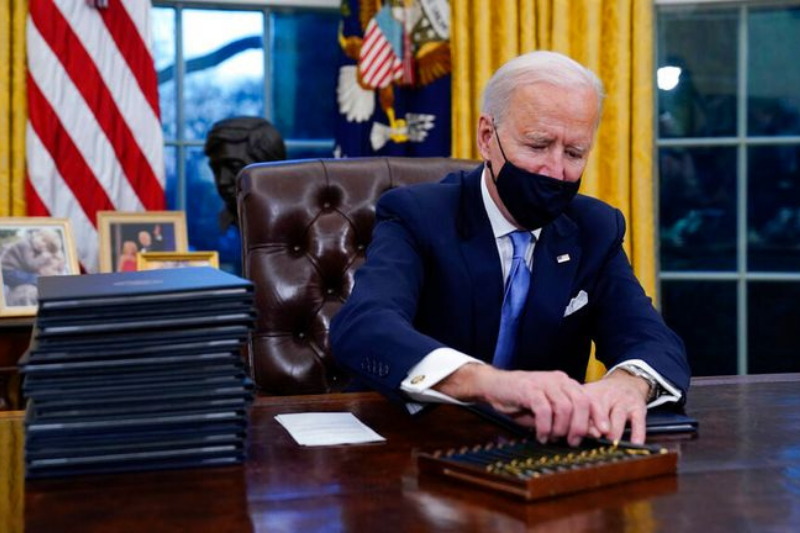 It’s official, Joe Biden has been sworn in as the 46th President of the United States. And the good news is that, for the next four years at least, we don’t have to put up with Donald Trump as President. And let’s face it it’s also great news for the environment because, apart from being a threat to the founding principles of democracy, this guy was also fundamentally bad for the environment.

Here we take a look back at Trump’s environmental legacy and list the actions Biden has taken to reverse his most detrimental policies for people and planet.

A fervent climate change denier, Donald Trump announced that the US would cease all participation in the 2015 Paris Agreement for Climate change mitigation, as soon as he came to office in January 2017. And indeed, on November 4th 2019, his administration gave a formal notice of intention to withdraw from the agreement, which ironically only came into effect on the 4th of November 2020.

In 2020, amidst devastating wildfires raging in California, former President Trump denied any correlation between the fires and climate change, even stating that it would “start getting cooler, you just watch… I don’t think science knows, actually.”

During his presidency he listed the fewest number of endangered species, under the Endangered Species Act, of any president. His administration even removed the grey wolf from the list of Endangered species in the United States, despite the objections of conservation groups “who argued it’s too early to remove wolves from the list”.

As for the border wall construction, Trump’s administration has probably inflicted lasting damage to the biodiverse regions of the southern states, as contractors have blasted and bulldozed their way through desert terrain and mountains in an effort to finish the wall. According to NBC news, in the Organ Pipe Cactus National Monument ecological reserve in Arizona, this has had the effect of displacing “century-old cacti and disrupting migratory paths for jaguars and wolves”. Sacred native American ancestral lands have also been threatened and contractors have depleted local water sources to mix concrete for the wall’s foundations.

In total the Trump administration officially reversed more than 100 environmental rules in the areas of climate change, clean air and water, wildlife and toxic chemicals.

At the same time, the Interior Department worked to open up more land for oil and gas leasing by limiting wildlife protections and weakening environmental requirements for projects.

The Department of Energy also loosened efficiency standards for a wide range of products.

In contrast, on his first day of office, Biden signed a series of executive orders to unwind the destructive social and environmental policies of the Trump era.

Rejoining the Paris agreement was the first step in “what Biden has vowed will be a sustained effort to safeguard the nation’s air and water, protect endangered species and combat climate change at home and abroad”.

Mr. Biden will also stop the border wall construction by putting an end to the national emergency declaration, set-up by the Trump administration to divert federal money to building the southern wall.

Now after 4 years of denial, climate change is listed as a priority on the White House’s website, stating that “President Biden will take swift action to tackle the climate emergency and meet the demands of science, while empowering American workers and business to lead a clean energy revolution”. Let’s hope we can count on the new President to keep his promises!